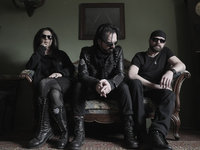 Emerged from the ashes of the legendary Garden Of Delight - and the similarity ends here - Merciful Nuns has evolved from leading the XXI century's resurgence of Goth to becoming a unique genre in itself. For more than a decade - both in studio and live - the Germans have retrieved what made early sinister music vibrate in all their natural force at a time when the blurred line between Post-Punk and Goth Rock still enabled a healthy mutual transfer. Nevertheless, their approach to that essential spirit is much polished and modern. Merciful Nuns galvanizes us to scan whether inwardly or beyond in search for clues upon which to base our own views on the ages-old human questions, either taking us on wondrous exoplanetary journeys through eerily serene sound realms or on ulterior odysseys across weird dimensions where mythology, remoteness and occult meet, or yet by sending us to raptures with anthemic rushes of gloomy rock. No other band has covered so much ground within the Goth realm in such a short time. Merciful Nuns is an insatiable beast, as its prolific - yet compelling - output has demonstrated since 2010. No less than 10 albums, 6 EPs and 2 live recordings form their rich musical legacy.